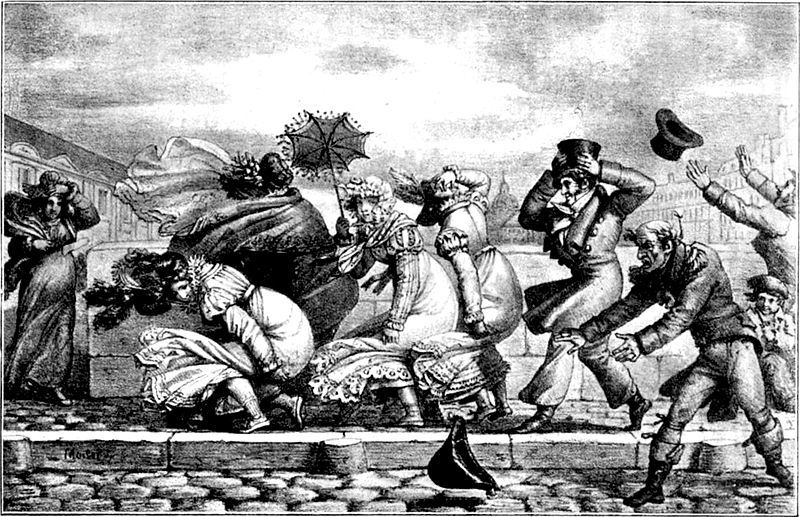 Part of my own motivation, when we planned a “storm chasing” night for After Hours, was curiosity. Why do people chase storms? Why is there such an appetite for all-day weather networks; a fringe element known as tornado chasers; and why, during a hurricane, will people converge on the shore and risk being swept off a rock into the sea?

We know we’re fragile creatures but usually manage to ignore it. Is storm chasing a way to remind ourselves of nature’s power and force, or, conversely, to prove we aren’t afraid? To play truth-or-dare with hurricanes—to sidle up to disaster and emerge unscathed?

Following our noses through poems, stories and songs into the wild weathers animated and contended with there, we didn’t really address these questions directly. I even forgot to bring something I’d found about the scientists who fly into the eyes of hurricanes—on purpose!—in order to bring us the data we use to understand their nature and predict their behaviour.

But I think I got a hint of an answer nonetheless. Something altogether different from the ideas above, which I suspect tell part of the story.

In many of the passages that were shared that night at After Hours, the wind took on a personality, it pursued a purpose, it blew itself a narrative course.

In Patricia Young’s poem, “Tornado in the Bible Belt,” the wind is a clashing of temperatures, “nature’s blender” and even God, who, with a “third layer of dry air” and “His vortex howl,” sweeps up a boy, then drops him “like a cigarette butt far from the house.” In Victor Hernanez Cruz’s “Problems With Hurricanes,” the wind is a bully pelting objects at people not just to hurt but to shame them. In Milton Acorn’s “The Squall,” read by Kim Foster, the wind “comes running down the bay, / Its waves like hounds and slanting leashes of rain / Bugling their way…” The wind’s letting loose wild dogs, performing a desperate music.

In Festes’ song from Shakespeare’s “Twelfth Night,” which John Lucas sang so beautifully for us, the winds and the rain arrive “with a hey, ho,” as if they’re only teasing. In Robert Frost’s “Wind and Window Flower,” a winter wind “concerned with ice and snow” stands in for unrequited love: “He sighed upon the sill,/ He gave the sash a shake…” The flower there, though, “leaned aside / And thought of naught to say / And morning found the breeze / A hundred miles away.” And in Gwendolyn MacEwan’s “Barker Fairely and the Blizzard” the wind literally carries away the person who asks the most fundamental question about art (and life): Is suffering necessary?

I left After Hours swept up by the mystery of wind, the air come alive, an invisible force that affects us without cease, and I understood that we are drawn to wild weather because the wind that feeds it likewise feeds us: it whips us out of complacency and into action. We lean into wind, we brace against it, we feel it in our faces and hair, we watch it play with (and sometimes angrily tear apart) the things around us. The fiercer the wind, the more fully, undeniably awake the person holding ground within it becomes.

A reminder that don’t meet in December—Chruchmouse wishes a merry and wondrous Christmas to all!   The next Churchmouse After Hours is: Wednesday, January 24 at 7 pm. Our theme: Sound & Silence.

Meanwhile, you can hear some of Victoria’s finest poets read their work at a celebration for The Best of the Best Canadian Poetry, this Sunday December 3 at 1:30 pm at the Fine Arts Building at UVic (Rm 103). Readers include Yvonne Blomer, Lorna Crozier, John Barton, Patricia Young, Sonnet L’Abbé and Shelley A. Leedahl. Hosted by Anita Lahey.