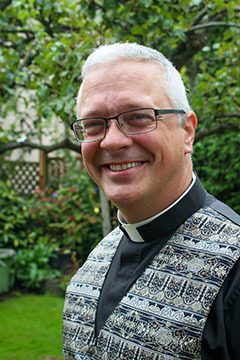 Craig is an explorer and ‘wayfinder’ at heart—geographically, culturally, and spiritually. For over twenty-five years he has brought together his thirst for understanding new people/systems/technologies/cultures and his yearning to help people live together in authentic community. Craig and his wife Jackie resonate with such re-emerging themes in the life of the 21st-Century Church as ‘authenticity’, ‘ancient’ yet ‘future’, and ‘community’.

Craig was first ordained a Canadian Baptist minister in 2003 and served as a pastor responsible for youth and families and faith formation. He was ordained deacon in the Anglican Diocese of British Columbia in 2015 and priest in 2016. Besides being the incumbent priest and troublemaker at St Mary’s since 2015, Craig also serves as a regional dean in the dicoese and is a Canon of Christ Church Cathedral.

Canon Craig is decidedly uncomfortable when stuck inside a box and figures God is, too.